Time to be turnin' around...if only you could!

Few attractions flaunt this structure as clearly as Splash Mountain does. While its two stories are obvious enough by themselves, the ride connects them in a way that builds an unsettling degree of tension.

To understand how, let's chart out...

The story begins as the protagonist, Br'er Rabbit, sets out in search of adventure, which is his objective. He finds thrills aplenty when he encounters--and outsmarts--his antagonists, Br'ers Fox and Bear. The situation escalates when they catch him.

Fortunately, it all resolves when Br'er Rabbit tricks Br'er Fox into throwing him down into the briar patch, where he lives. Br'er Rabbit celebrates in the safety of his home, leaving Br'ers Fox and Bear unable to find him amid the thorns.

Satisfactual, no? Now, let's discuss how it affects...

We risk our lives on Splash Mountain.

Big whoop, right? From the dynamite of Thunder Mountain to the cannons of Pirates of the Caribbean to the elevators of the Tower of Terror, we're lucky we aren't institutionalized for self-endangerment whenever we enter an attraction.

In most cases, attractions like Thunder and Pirates and Tower tell a set of Observable and Experiential Stories that overlap. One cannot exist without the other.

Splash Mountain, on the other hand, keeps its Observable and Experiential Stories parallel'd. Yes, we share Br'er Rabbit's objective, "to seek adventure," but we never communicate or help one another in any meaningful way. It's just something we have in common.

The main difference between our story and Br'er Rabbit's is the nature of our antagonist. After all, we don't have gigantic predators bumbling through the landscape after us. Our foe is harder to pinpoint.

The simplest way to identify our antagonist in Splash Mountain is going through it, as if we're on the ride, starting with the walk to the entrance.

Notice how long the walk is, and what you're looking at on the way.

By placing the biggest drop at the front of the ride--almost a full minute away from the entrance--we’re told, “Hey, this is a thrill ride. Hop aboard, and you'll be rewarded with this drop. (That is, you'll be rewarded as much as anyone can be rewarded by being dropped off a goddamn mountain.)”

The ride lives up to its promise--we plunge down the falls--but not at first. Instead of giving us the big drop, it teases us with anti-climactic lift hills and a treacly sing-along.

Thus begins the cruelty of the Experiential Plot: now, when we expect to be hurled into a briar patch, we are instead serenaded by Alvin, Simon, and Theodore.

The shaggy dog joke continues as we sail through the episodes of the Observable Story.

As the Observable Story culminates with Br’er Rabbit’s capture, we culminate with it by ascending the hill for the drop. At this point, the two stories are literally parallel.

The climb gives us with time to reflect. Over in the Observable Story, Br'er Fox plans to kill Br'er Rabbit atop Chick-a-Pin Hill, and we're riding along to see how he'll do it. 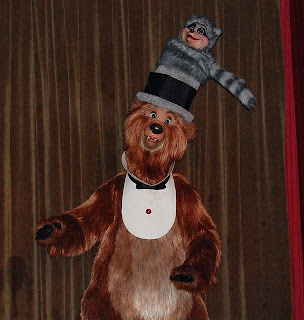 This gruesome tone bleeds over into the Experiential Story. After all, if it's this perilous for Br'er Rabbit--who's lived here since George H.W. Bush was in office--then how safe are we up here?

And that's when we begin to fear the drop--even though it's what attracted us to the ride, in the first place!

But why are we dropping? What motivates us off of Splash Mountain? Do we have an equivalent to Br'er Fox?

The Experiential Story portrays the ride, itself, as our antagonist. Nothing motivates our fall into the briar patch. It’s just where the ride--the eeevil ride--takes us, in order to show us what Br'er Rabbit goes through.

Worse yet: we asked for it! Remember, at the entrance? "Hey, this is a thrill ride, hop aboard, and you'll be rewarded with this drop?"

First Splash Mountain teases us with a thrill, then it makes us regret it, and then--as soon as we don't want it anymore--it gives it to us, anyways.

When I filmed the ride for this essay, there was a little girl sitting behind me who was terrified from the moment she boarded the log flume. In an attempt to shield my video from her shrieking, I cupped my hand over the speaker.

In retrospect, I wish I hadn't, because after the big drop, her mother tried to console her by asking, "Did you have fun? Did you like it?" and the girl sobbed, "Not really much, but I liked the animals."

With the volume up, you can hear the mom squawking, and the daughter mumbling.

You don't need a precocious child to spell out how the Experiential Story affects its audience. The next time you're on the bridge that overlooks the roundabout at the base of Splash Mountain, watch the riders recover from the drop. Notice how many of them look upset.

A visible minority frowns through the climax of this beloved Disney ride...through a bonding experience...even through an adrenaline rush! Think about that: they're so upset by this Experiential treachery that they suppress their own brain chemistry to frown!

Fortunately, recovery time is quick, because we’re rewarded with the spectacle of the "Zip-a-Dee-Doo-Dah" scene, and the drop was pretty awesome, and seriously, what did we expect from a ride called “Splash Mountain,” anyway.

But beneath it all lurks an Experiential Story that lures us with a thrill ride, and then charms us with a dark ride, and then "betrays" us by giving us the thrill ride it promised at the start. The juxtaposition makes the watercolors of Br’er Rabbit’s story look all the more sinister by contrast.

For more insight into the ride's narrative structure, I recommend Steven Johnson's essay, "Splash Mountain: a Story Within a Ride Within a Story."

I was only one draft away from completing my essay when he published it, so when I read it, I spent the whole time nodding in solidarity and seething with envy.