The Haunted Mansion: an attraction so evocative that guests have been deducing its fictional history since it opened in 1969.

Who owns the house? Is it the Ghost Host, or Master Gracey, or--hey, are they the same person? Does the Bride push us off of the balcony, or is it a coincidence that we enter the graveyard on our backs? Why are the maids and butlers loitering in the Stretching Room when there's a mansion's worth of cobwebs that need dusting?

It’s a ride full of open-ended questions, and its fandom has been trying to answer them for decades. Most of the resultant fanfic is convoluted, much of it is harmless, and some of it has even been canonized.

On the other side of the fence, a poorly phrased quote from Imagineer Marc Davis has incited a backlash. It is now fashionable to claim that the ride doesn’t tell a story, at all.

This belief is nonsense, but it's a dangerous breed of nonsense: the kind that prevents progress. If we hope to see more attractions like the Mansion, it's crucial to understand what its story is, why it’s easy to miss, and why the ride is still fun if we miss it.

In the book, the Haunted Mansion: from the Magic Kingdom to the Movies, Jason Surrell spells out the chronology for us:

"Though not as intricately constructed as a Shakespearean play, a story exists. In fact, Imagineering legend and Disneyland veteran Tony Baxter believes that, in the end, combining the seemingly divergent work of [Imagineers] Marc Davis and Claude Coats inadvertently gave the Haunted Mansion a fairly solid three-act structure.

"In Act One, which begins slowly and ominously in the Foyer, guests anticipate the appearance of the happy haunts, and experience poltergeist activity and unseen spirits.

"Madame Leota provides the curtain that separates Act One and Act Two. The medium conjures up the spirits and encourages them to materialize, which they promptly do in the swinging wake in the Grand Hall and the Attic.

"The descent from the attic window into the Graveyard takes guests into Act Three, in which they are completely surrounded by the ghosts who are enjoying the manic intensity of a graveyard jamboree. Finally, one of three Hitchhiking Ghosts materializes beside the guests in their Doom Buggy before the exit."

We are the protagonists, our objective is to escape from the Mansion unharmed, and our antagonists are the ghosts, who grow bolder, the longer we spend with them.

Our lives are threatened by forces we don’t understand. Simple, immediate, and dire, the Experiential Story acts as a straight man for...

This half of the Bi-Narrative is where things get controversial, which is ironic, considering it’s been around much longer than the ride, itself. Surrell chronicles of one of its earliest descriptions:

"Walt mentioned the [Mansion] project during an interview with the BBC in London, as he expressed his sympathy for all of the ghosts that had been displaced from their ancestral homes due to the London blitz during World War II and new construction to make way for modern housing.

"He then announced that he planned to build a sort of retirement home at Disneyland for all of the world’s homeless spirits. ‘The nature of being a ghost is that they have to perform, and therefore they need an audience,’ Walt said.”

Despite Walt's tactless introduction, Disneyland stuck with this premise, promoting it for several years before the attraction debuted. In 1961, they passed out a handbill at the park's entrance, which read:

"Gathering the world's greatest collection of ghosts is no easy task. Most people are kind of reluctant to admit they know any! But Walt Disney has had his talent scouts searching for several years...and in 1963 the Haunted Mansion will be filled with famous and infamous residents."

While the ride wasn't built by 1963, its exterior was, so at least it looked like a haunted mansion. One of its most provocative features was a sign, posted outside the gate, which read: 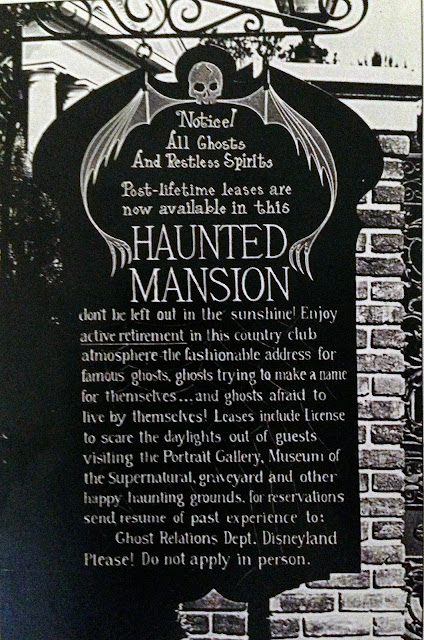 Bear in mind, the ride didn't open till 1969. In the intervening time, Imagineers created an oodle of effects and gags, but every attempt to unify them into a plot proved fruitless. Marc Davis recalls:

"For about two or three years, [the Mansion] was kind of a 'dead duck,' really. These guys worked on it, but they couldn’t sell the idea the way they had it...all that work on a story bogged the Mansion down to the point where it just wasn’t done."

DoomBuggies.com summarizes one of the most developed narratives:

"The story revolves around...a fictional Captain Blood (or 'Bloodmere,' or 'Gore,' depending on who tells the tale) and his family, all of whom met their demise in the Haunted Mansion."

While the material was macabre enough for the genre, it was much too involved to explain to an audience traveling at omni-mover speed.

What’s more, these stories were derived from the characters who enacted the effects and gags, and therefore, they focused on spooky things happening to other people. Forgive me for quoting myself, but...

Surrell explains how the script found simplicity by stressing the setting, instead of the characters:

"[Writer X. Atencio] took the scenes on which Davis and Coats were collaborating and arranged them logically in terms of the Mansion's physical layout and the experience's overall emotional construction. Almost by default, X. returned to Walt's original concept of a retirement home in which displaced spirits could spend their afterlives happily haunting any unsuspecting guests who came along."

Returning to this premise allowed the Observable Story to involve us more directly. Now, instead of dramatizing tragedies from the past, which we weren’t there to witness, it casts us in a major role, here, in the present. To understand who we are, from the Mansion’s perspective, let’s review the script.

As we enter, the Ghost Host spends a great deal of time establishing that this is, indeed, a retirement home for ghosts.

"Our tour begins here, in this gallery, where you see paintings of some of our guests as they appeared in their corruptible, mortal state. [...]

"There are several prominent ghosts who have retired here, from creepy old crypts from all over the world.

"Our library is well-stocked with...marble busts of the greatest ghost writers the literary world has ever known. They have all retired here, to the Haunted Mansion.

"We find it delightfully unlivable here in this ghostly retreat."

Then, he clarifies that this isn’t just a tour--it’s an open house, for us!

"Actually, we have 999 happy haunts here...but there's room for a thousand. Any volunteers?

"If you insist on lagging behind, you may not need to volunteer!

"If you should decide to join us, final arrangements may be made at the end of the tour."

Near the end, Little Leota encourages us to...

"Hurry back! Be sure to bring your death certificate if you decide to join us. Make final arrangements now! We've been dying to have you!"

As we exit, the song, "Grim Grinning Ghosts," offers us one last pitch.

"If would like to join our jamboree,
there's a simple rule that's compulsory:
mortals pay a token fee.
Rest in peace...the haunting's free!
So hurry back, we would like your company!"

Having analyzed a decade of documentation and a quarter of the ride’s script--all of which was written by bonafide Imagineers, and not some thirty-year-old who works in Adventureland--we can confidently chart out the Observable Story.

The Ghost Host (and the 998 other happy haunts) are the protagonists, their objective is to convince one of us to fill the thousandth vacancy, and, since we're reluctant to die, we are their antagonists.

It begins when they open the house up to us, culminates when the Ghost Host leaves us to the mercy of the other ghosts, and resolves when we're encouraged to return with the proper paperwork.

Notice how loose that is? The Observable Story understands that less is more. Instead of weighing us down with exposition, it sticks to the basics of conflict and plot: who's inside, what they want, how they see us, why we’re allowed inside, what motivates us through, and what nudges us out when it's done.

That's it. Everything else is speculation.

Which isn’t to suggest that either of the stories in this Bi-Narrative are satisfying, by themselves. Their execution leaves much to be desired.

For example, the Ghost Host undermines the Observable Story when he leaves us alone for half the ride--and when he returns, he never offers us the chance to register for the thousandth vacancy. He’s the main character, yet he shrugs off his own objective! If he doesn’t care about it, why should we?

The Bi-Narrative implies dozens of plot-holes like this and it never, ever resolves them...yet they don't stop us from enjoying the ride.

This, I suspect, is why skeptics doubt that the Mansion tells a story--and that’s fair. After all, we don’t get off the ride, reflecting on how the ghosts kept growing bolder as we tried to escape, nor do we contemplate suicide because, “Hey, it seemed like a nice enough place.”

We like it because, y'know, it's full of fun stuff! From the effects (like the shadowy hand that passes over the clock) to the GIF Stories (like the ghost who blows out her candles with such force that she also blows out the ghosts at the table) to the mysteries (why did the Ghost Host hang himself in a chamber that has both, doors and windows?)... 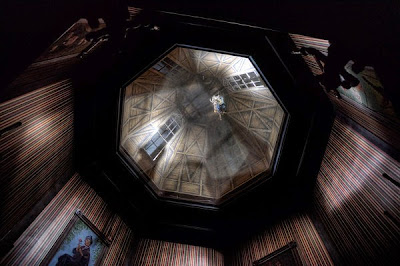 He got up there, he brought rope, and he didn't climb outside.
It's fishy, is all I'm saying.

...it's clear that the components are the stars of the show.

Don’t feel bad for the Bi-Narrative. It doesn’t mind being overshadowed, because it doesn’t have the same priorities as other types of stories.

Movies and novels and ballads and whatnot take great pains to ensure we that we understand what’s going on. We know the individual characters, their relevant backstories, the rules that they live by, and so on.

The Mansion’s Bi-Narrative doesn’t care if we’re confused. It cares about organizing all of the components, which have been derived from the premise, into a satisfying order. This structure was taken from classic cartoons, like “the Skeleton Dance.”

To demonstrate how the Bi-Narrative acts as connective tissue between us and the components, let’s pretend to enter the mind of Imagineer X. Atencio, back in the sixties. It’s our job to arrange all of the components from this newfangled Haunted Mansion ride into a single script.

“Let’s see, here...these Singing Busts are charming. Where can we place ‘em? Probably on a shelf somewhere. That’s where busts go: on shelves.

“Hey, there’s a Library! Libraries are full of shelves! Perfect! We'll display the Singing Busts on a shelf in the Library, beside the poltergeist who’s browsing through the books!”

Of course, this placement is absurd. The hammy a cappella number would upstage the subtlety of the rest of the scene. Both components would be weakened by the pairing.

Here’s where the Experiential Story helps us. If we know that, throughout the ride, the ghosts are supposed to arc from “poltergeisting” to “materializing” to “haunting us,” then we know that the Singing Busts should come after the Library, but before the beat where the Hitchhiking Ghosts sit beside us.

This approach is why the spookier material is grouped towards the front of the ride, while the sillier material is saved for the end, and it’s why the most effective laughs and thrills and insights are saved for the climaxes of their respective scenes. Not only does it unify the components into a coherent experience, but it also ensures that they play nicely and share the spotlight.

The components hang from the Bi-Narrative, like pearls on a necklace. Yes, the pearls are the treasure, but don’t underestimate the string: it connects us with them, and without it, all we’ve got is a fancy set of marbles.