Treasure Enough for All

In 2006, Disney inserted Jack Sparrow and a few other characters from the Pirates of the Caribbean films into the rides that they were adapted from. This overlay proved controversial.

Even the professionals who are responsible for the films found it unsatisfying. Here's a quote from screenwriter Terry Rossio's account of riding it for the first time.

"We...enter Adventureland. I can't wait to go onto the newly refurbished Pirates of the Caribbean ride. Back in the Bahamas, Johnny [Depp] had called us into his trailer to discuss the proposed changes he'd been sent. We agreed that the Jack Sparrow vignettes felt uninspired, and made suggestions on how they could be improved. The original Marc Davis sketches were all about the suspended moment, a particular situation that indicated a larger story (think of the dog with the keys). So we were really curious to go on the ride and check out the results.

"So we hop onto our boat, and some of it is impressive... But the vignette poses were still bland; to end the whole affair with Jack Sparrow sitting on a bunch of treasure, that's about as straightforward as you can get ([my writing partner, Ted Elliott] and I call it 'first draft theater.') It's not that captured moment style that Marc Davis did so well. Later we heard that the imagineers wanted to do something more creative, but ran into budget restrictions."

Remember, this man voluntarily put his name on a film franchise full of scenes like this one. Ouch.

It's telling that none of the critical theory written about the ride after 2006 even acknowledges the overlay. For example, Foxx's Fire in the Night, which is one of theme park academia's most celebrated essays, was written five years after the fact, but you wouldn't know by reading it.

Fortunately, it almost doesn't matter how many characters get slathered over the scenes. The overlay misunderstands the original ride, the film franchise, and theme park narratology so deeply that the brilliance of what used to be in its place tends to shine through.

Where it doesn't, the overlay feels more like graffiti than a bastardization. Skeptics are left feeling that, "One day someone will have the decency to fix this." 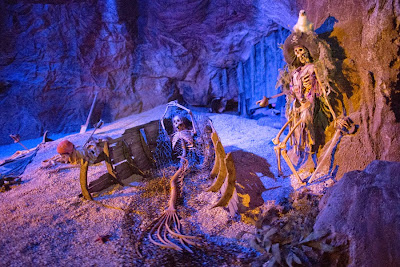 Personally, it took eight years of riding and four months of working at the attraction to understand the overlay's story, but I think I did it.

Here's one of my favorite Forensic Stories. It can be found as we exit the Jungle Cruise. 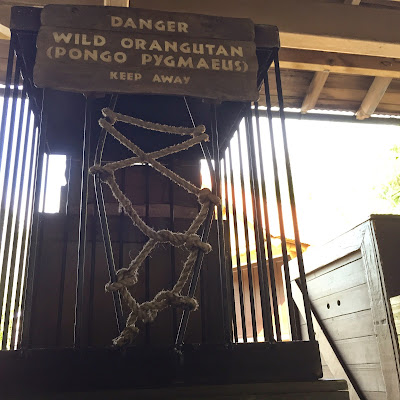 The joke is obvious: a dangerous animal, who’s strong enough to pry open the bars of its cage, is running loose. To me, what makes this story so special is the rope between the bars. Why is it there?

Here are some clues I’ve noticed. The rope fits the bent bars, which implies it was tied on after the escape.

The rope is also…well…rope, which is even more pliable than the bars that the orangutan was strong enough to bend. If the skippers intend to keep using this as an orangutan cage, then rope isn't the best solution.

Perhaps they can’t afford a new cage, so they figured, hey, this is better than nothing. That said, there’s an explanation I like even better: the skippers tied it on out of spite.

After all, the Jungle Cruise—and Adventureland, in general—explores the absurdity of humankind’s attempts to dominate nature. So imagine the skippers being so hurt that a wild orangutan didn’t wanna suffer the oppressions of domestication that, after it escapes, they rope up its cage.

"Fine! Leave! I just hope you enjoy your natural habitat, because you’re not welcome in our small cage any more! Boy, did you blow it, mister!"