Forget Seinfeld--theme parks are unique in telling a type of story where nothing happens.

They feature neither dialogue nor action. There are no visible protagonists, objectives, or antagonists. The events began, escalated, and resolved long before we arrived.

These stories are forensic. They leave archeological clues that imply what happened, which lets us assemble the pieces together into a narrative.

For a dramatic example, let's consider this concept art for the Magic Kingdom's Pirates of the Caribbean. 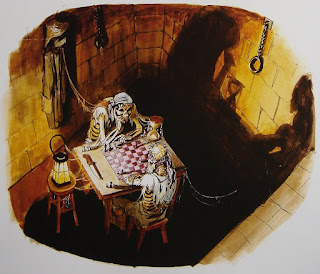 In this forensic story, we can imply that each prisoner badly wants to win the chess game, but unfortunately, they're in double-stalemate. They want to win so badly that they die considering their next move. There they remain to this very day, just as likely to surrender as they were when they were alive.

Since a forensic story doesn’t move, we get the beginning, middle, and end all at once. Here, we know the sequence of events: the pirates were taken prisoner, and given a chess board to pass the time. They played a game, wound up in double-stalemate, and quit living before quitting the game. We learn all of this without a word or movement.

Here's where the structure gets interesting. We got to play detective, and that was satisfying--but the most provocative part dawns when we realize what we still don't know.

For example, in the chess scene, we don't know why the prisoners refused to start a new game.

Maybe they were so competitive that they refused to submit to one another.

Maybe they hated their captors so much that when they reached the double-stalemate, they just stared at it until they died. Sorta like a hunger strike, but with chess. That might explain why the lantern’s still lit—-their captors are cruel, and think it’s funny to provide the skeletons with enough light to keep thinking.

Maybe the pirates were smart enough to play chess, but too dumb to realize that they were in double-stalemate, so they just keep moving around the board, looking for a gap that never came. It’s unlikely, but hey, more whimsical things have happened in these rides.

Forensic stories are gems, loading tiny spaces with tons of information. They make fantasy worlds feel real and lived in. We’re rewarded for paying attention, provoked into asking questions and imagining answers, and immersed even further into the parks.