To all who come to his happy place: kidnap and ravage and don't give a hoot!

Wanna hear a story from the Happiest Place on Earth?

A man conquers Death, itself, and returns to life! Unfortunately, when he wakes up, he finds himself in a coffin that's been nailed shut. Unless he can muster enough strength to pry off the lid, he’ll be buried alive as quickly as grief will allow.

This sounds gruesome, yet when the Haunted Mansion tells it, it’s not only funny, but it’s also appropriate for all ages. Check it out:

Believe it or not, the Haunted Mansion lightens this dire scene by telling it...as a GIF Story. That’s one of the benefits of this narrative structure. It can make dark content accessible for all ages.

In other words, yes, I’m proposing that this vivisepultural tragedy is, in fact, funny because we know that this poor bastard will be stuck inside his coffin forever.

Let's consider the prisoners at the end of Pirates of the Caribbean.

A jail cell catches fire, and the inmates can't escape. Fortunately, a dog has retrieved the key--but unfortunately, he refuses to come anywhere near them. Without the dog’s help, the prisoners will burn to death.

Imagine if we were writing this GIF story for an all-ages park, and we had to decide which moment to repeat.

We could choose the moment when the prisoners first spot the fire, as it ignites on the other side of town. Maybe their knees could all tremble in synchronicity. That might be cute, but the stakes are too low. It’d be more unsettling than enthralling.

So let's aim for something more dramatic--like the moment when the prisoners really go up, but just before they collapse from heat-stroke and thermal decomposition. Picture it: three clunky, blazing animatronics...their plasticky skin bubbling with realistic sheen...flailing and scrambling like Kermit the Frog, in search of relief they will never, ever find.

Let's split the difference, and choose the moment in the story that’s most compelling, yet least traumatizing--the last moment of hope. The prisoners will do anything to coax that dog over: whistling, offering treats and compliments...one even has a leash. 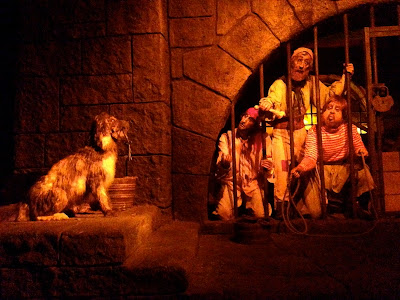 A leash! What could he possibly do with a leash?! Does he hope to use it as a lasso? Or maybe as a disciplinary whip? Or maybe he's indicating that he'll to take the dog for Walkies?

My guess: he has no idea, himself! Who cares?! He's in the last minute of hope! You name it, he'll try it!

A GIF Story like this treads a delicate path. If we say that--given the right context--getting burned alive can be appropriate for all ages, then how about getting skinned alive? Is genital mutilation okay? Can we adapt Quills into a dark ride for the France Pavilion?

Conversations like this get tricky, and differ from case to case. For now, we won't delve into any of those ambiguities.

We can say for sure, however, that there's no appeal in watching someone get traumatized. An effective GIF Story knows how despicable it is to laugh at a victim, and doesn't ask us to do so.

Instead, it makes light of an absolutely hopeless circumstance--and the absolutely hopeful character who keeps fighting, anyway. It's funny in the same way that the last line of this scene is funny:

Seriously, look at these GIF Stories that Walt, himself, oversaw. They're about water torture, violent sodomy, and the protagonists who refuse to submit. Here they are:

All of the injustice, cruelty, and futility is pushed to the background in order to portray the protagonist as an absurd hero. Through their suffering, we see the humor and integrity of delaying Fate, itself, with an action that's so mundane, it can be conveyed in a single GIF.