A Cannon, a Castillo, and a Cave

Here's a Forensic Story from the queue of Florida's Pirates of the Caribbean. 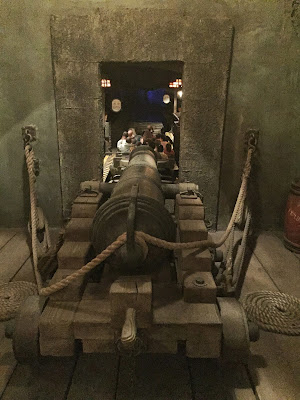 Actually, better make that "Forensic Stories," plural. Each layer of this sightline has one to offer.

At first glance, we can see that we're in a fort. This is Castillo del Morro, which we'll see again as the pirates attack it, once we're on the ride, in Bombardment Bay.

Now let's consider each of the layers of this sightline.

In the background, that blue-black void is the caves. They're probably why the Spanish chose to build on this location, in the first place, and you'll notice that they're kept unlit. Clearly, they are not meant to be some quaint, scenic feature of the Castillo.

In the middle-ground, we see that the caves' function is pragmatic: a boatful of guests prepares to use them as an escape route. (Of course, the caves will dump 'em out right in the middle of the invasion they were trying to avoid. Whoopsie!)

In the foreground, a cannon is prepared to fire--dangerously close to the guests' heads--just in case pirates invade. That's how serious the stakes are: the Spanish are willing to destroy the caves, their Castillo's most irreplaceable feature.

None of these Forensic Stories are unique to this sightline. We can see the caves and the embarking boats and the cannons elsewhere in the queue, and arrive at the same conclusions.

What's impressive is that, by lining 'em up in a row, this sightline not only tells us what happened in the space of one neat little window, but it also forebodes the dangers ahead. In other words, it's not only part of the story about the Spanish defending against invaders, it's also part of ours.

For instance, the Forensic Stories are sorted by how dangerous they are to us. The farther the sightline goes, the more concerned we should be.

The cannon is up front, and no matter what evil comes knocking, the big red button'll be there. Then comes the Castillo, and sure, she's taken a few cannonballs, but it'll take more than that to topple her. Lastly come the caves: foreboding, ancient, unknowable. If we die in them, we may as well have never been born.

The sightline also boils the Forensic Stories down into simple shapes that guide our eyes through the composition. The cannon points towards our destination: beyond the window, past the dock, and into the unknown.

A cylinder, some rectangles, and a negative space. Angle them just so, add a little context, and voila: they'll suggest what-might-be over a hundred years of history without using a single character or line of dialogue, and fill our subconsciouses with meticulously themed dread.